Here are 7 times the USA used chemical weapons on civilians 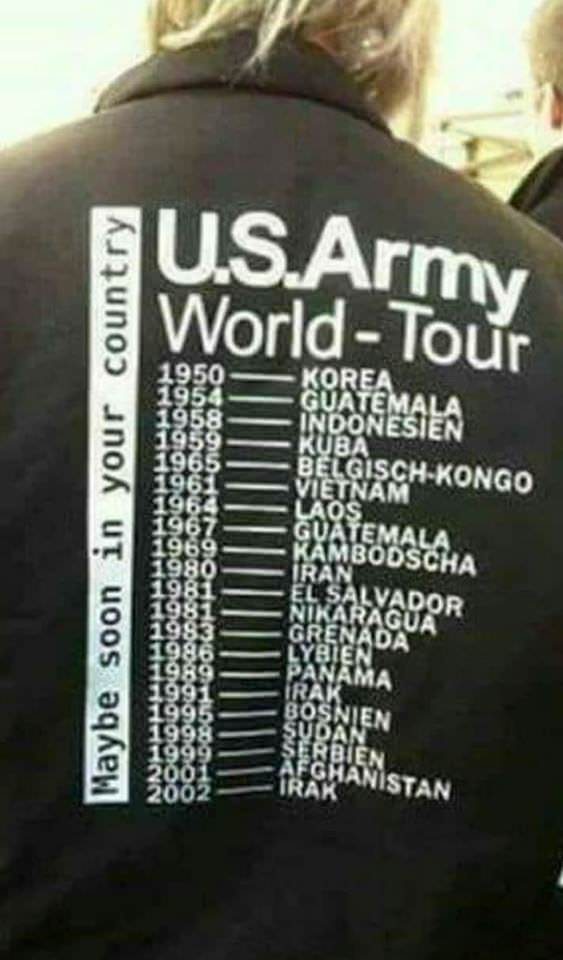 Here are 7 times the USA used chemical weapons on civilians

And these are just the ones we can remember

On the one hand, it's bonkers to be upset about chemical weapons.

In 1919 Winston Churchill suggested using them against the Red Army, telling Parliament: "I do not understand why, if they use poison gas, they should object to having it used against them."

In 1920 on war in Iraq he added: "I am strongly in favour of using poisoned gases against uncivilised tribes... Gases can be used which cause great inconvenience and would leave a lively terror and yet would leave no serious permanent affect on most of those affected."

And after D-day he suggested his cabinet consider "soaking" German cities in mustard gas, even though the Nazis hadn't used it because "what is to their detriment is to our advantage" and it might shorten the war.

He said that the use of chemical weapons was "simply a question of fashion changing, as she does between long and short skirts for women".

And in that, at least, Churchill was right. As America's president is bewailing the sight of "beautiful babies" choking on sarin gas in Syria, as his press spokesman blunders through the Holocaust like the kid picked last for the team, they're forgetting just how keen America is on using weapons with bad chemicals in on their own people, other people's people, and brown people.
1. The Presidential inauguration, January 2017
"Let's gas America first!" (Image: REUTERS)

When Trump talked about the "millions" of people who didn't come out on the streets of Washington to see him sworn in, he forgot about the several thousand who were protesting the fact it was happening.

As proceedings began police were dealing with graffiti, overturned rubbish bins and a handful of burning cars by firing CS gas into the crowds.

CS or tear gas is classified as a chemical weapon and its use has been banned in warfare since 1993. It is nevertheless allowed for domestic riot control.

The main ingredient, 2-chlorobenzalmalononitrile, was discovered in 1928 and developed at secretive weapons testing establishment Porton Down in the 1950s, first on animals then on British servicemen.

No chemical weapons were fired on Nazis in the Second World War - but America intended to.

On December 2, 1943, German planes bombed the Italian port of Bari. One of the ships sunk was SS John Harvey which was carrying a secret cargo of mustard gas. It was so secret that when survivors were rushed to nearby hospitals doctors were not able to give the right treatment.

As in Syria today, world superpowers fought a proxy war both at arm's length and in person over north and south Vietnam. America not only helped South Vietnam to rain down chemical weapons on civilians and combatants alike but is thought to have dumped 20m gallons of chemicals itself.

Weapons used included the defoliant Agent Orange which according to the Red Cross has left 1m people - and many American veterans - severely ill with chromosomal defects, birth deformities, high rates of leukaemia and cancers.

When nine-year-old Kim Phuc was pictured screaming and covered in burning napalm after South Vietnamese forces, trained and equipped by the US, dropped napalm on her, she survived - just. America's reputation didn't.
4. St Louis, 1953-54 and 1963-65
Melissa McCarthy as Sean Spicer on SNL
"No! We invited them to the Black Person's Centres for Magic Dust Fun!" (Image: NBC)

St Louis, Missouri, is a predominantly poor and black neighbourhood. For many years it was used by the US Army Chemical Corps for secret experiments to see how chemical particles dispersed in the atmosphere.

Sprayers were put on social housing and schools, as well as vehicles. They included the Pruitt-Igoe housing complex, 70% of whose 10,000 residents were children under 12.

People were told the Army was testing a smoke screen in case of Russian invasion. Research of declassified documents - which called the area a "densely populated slum district" - found the chemicals were zinc cadmium sulfide and a compound known as FP2266 thought to be radioactive.

Residents reported premature deaths and cancer and the testing was finally exposed in 1994. High doses of cadmium over long periods can cause bone and kidney problems and lung cancer.

When a mad religious cult that practiced polygamy and was accused of child abuse was said to be stockpiling illegal firearms.

The fact they were Christian didn't stop the authorities getting a search warrant, at which point the cult boarded themselves up in a Texas ranch and refused to come out.

The siege lasted six weeks and ended with a gun battle and a fire that no-one could agree who had started. The FBI fired CS gas into the compound and then denied doing so.

White phosphorus can kill by burning through human tissue. It will carry on burning as long as there is oxygen present, and attempts to extinguish it merely set something else alight.

It melts the skin and can cause heart, liver and kidney damage and multiple organ failure. If inhaled it can burn the lungs from the inside out and if ingested it can destroy internal organs. Victims defecate a "smoking stool".

It is allowed to be used as illumination or as a smoke screen, but not against personnel. It was used by US Marines in the first Battle of Fallujah against insurgents as a "shake and bake" tactic - phosphorus to get them out of buildings, and high explosive to kill them.

The US complained in 2009 that the Taliban were using it "illegally" against allied troops, and then admitted using it itself. Saudi Arabia has been accused of using US-supplied white phosphorus in Yemen in 2009 and 2016.
7. Ferguson, 2014
Police fire tear gas, rubber bullets at group carrying unconscious woman in Ferguson

On August 9 Michael Brown, aged 18, was seen stealing cigarillos from a convenience store. Police were called, and despite reports he had his hands up saying "don't shoot" a white officer shot him dead.

His body was left in the street for four hours and the incident sparked street protests over police brutality and simmering racial tensions. The riots took place at the time, months later when a grand jury refused to indict the police officer, and on the one year anniversary of Brown's death.
On each occasion protesters were attacked with CS gas.

In 2015 a Department of Justice report found the Ferguson Police Department had engaged in misconduct. It was accused of discriminating against African-Americans in a "pattern or practice of unlawful conduct".
"Yeah, but previous administrations innit" (Image: Rex Features)

Most of these happened under presidents other than Trump - but considering his first day in office including gassing his own people with a weapon ruled unfair on a battlefield, he appears to find their use convenient when it suits.

It's worth noting the US renounced chemical weapons in 1969 and ratified the Biological Weapons Convention in 1975.

It renounced them again in 1991 and in 1993 signed the Chemical Weapons Convention. It still has them in its arsenal.

The US has promised to destroy all its chemical weapons. It has also promised "a overwhelming and devastating response" if anybody uses chemical weapons against it, so presumably it might keep a few in reserve.

Chemical weapons are easy to use, easy to criticise, and a moral minefield a leader blunders into at their peril.